We bought her at Erik and Inge-Lise Ussing - Kennel Border Team.

In addition to the pictures, we saw her the first time, when she was 6 weeks and we broughtt her home when she was 8 weeks.

Susanne joined us on the two trips, she had bought Jessy's sister.

We have been very hospitably received by Eric and Inge-Lise and we look forward living with Amy's puppy. There is, the small story to the puppy, that Maria exhibited Amy at DKK's Bornholmer Exhibition in 2008.

We picked Jessy up in Sorø, and having a lot of spare time, we decided to vicit the Danish Sheltalnd Sheepdog Club exhibition in Ørbæk. We could just as well admit our "betrayal" when all Sheltie-friends were gathered in one place.

We were also, as expected, received with indignant outbursts, but when they had looked at the puppy, they had to admit that a Border puppy of course is a delightful experience.

We had a nice trip home with the two puppies, and we meet a lot of people wherever we stopped the car.

Comming hom, we first had to say hello to the shelties, then they saw the puppy. Jessy was pretty unimpressed by the three girls studies - she was busy examining her new home. Only a little growl as she tried to lay on Thea's place, as Maria lay with mattress and blanket on the floor. Jessy looked a little on Thea, scooted over 5 cm and fell asleep. At bedtime she tumbled into her new dog bed at Maria's room together with Maria and Thea, and then all was silence for the rest of the night.

The next day there was a little sniffing again, but a friendly atmosphere and Jessy has certainly felt safe in the house. After the first week it seems like Jessy has been living here always. She has become more assertive towards the other dogs -  and our socks and feet - we had just forgotten  about puppy teeth and body parts near the ground.We introduced her to our canine friends, the club and our training activities, she has worked both agility and obedience training. As a 9-week birthday she was allowed to accompany the others on the trip in hundermeterskoven - without a leash. It worked out fine, and she now runs freely at the beech and in the wood. 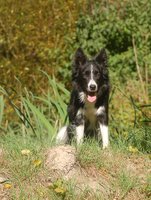 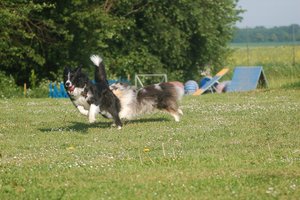 After the first year Jessy has settled into the house - she's still the troublemaker , but we are beginning to see a slight building maturity. We have her strongly suspected to be a sheltie in borderdisguise.

Jessy is now reported to obedience class 1 and she begins to agility .

Jessy 's a fast dog that needs precise directions , she is absolutely docile , unfortunately it has proved that she very easily stresses up , so we have had to acknowledge that she is no competition dog.

On the other hand , she is a sweet and social dog at home, and that's fine with us.