We had many theories about how and when Nunu were introduced to the rest of the family, we never got to test theories for like many other things, need overtook planning.

New Year's Eve Maria had a need for  an evening in town, so it ended up with a quick intro. Of course the dogs found a solution and quickly agreed that they might as well keep a pyjama party and spend the night together. Once again we had to acknowledge that we as humans can make a lot of fine and long deliberations and concerns about what is best, and once again we had to realize that if you leave it to the dogs - they are doing just fine..

Nunu had a fine time with Maria, they moved to Aakirkeby and took care of the basic education of Get It, when she appeared. She vicited Teamsheltie and step by step she started to stay here.Get It is a super atleth and Nunu likes the couch, Nunu has a great time here.

Time has passed, Nunu has been living on Sosevejen and has settled well here.

In August 2020, she took ill, a trip to the vet showed kidney problems. The vet could not offer us a permanent cure, so we decided that with her 12 years, we had reached the end of the road and Nunu was put down. 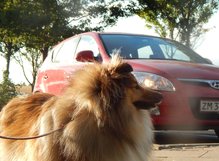 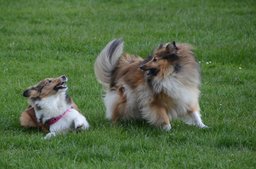 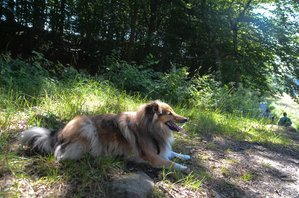 Nunu was the first dog in Teamshelties branch in Rønne.

Maria moved to Rønne and rented a small townhouse with a friend, the dogs kept Sosevejen as a base from which they went training with Maria.

In the summer of 2013 the Danish Kennel Club held there dogshw in Rønne, and we vicited. Leif took a break in the tent with a few breeder friends, and they got to talking about rescue dogs. They told a sad  story about this family, who have had a sheltie for 4 years. Now they have moved to the countryside and had a terrier to keep small animals away, but the terrier did not like the sheltie, they had decided that they would try to redeploy their sheltie.

A little sad history which Leif asked them not to tell Maria.

Maria came, Leif took a walk, and when he came back, the company was obviously involved in a deeply serious discussion about what we could do for the poor dog.

Maria contacted her landlord and his roommate, the family was contacted, and 25 August, we found ourselves suddenly in a car on the way home from Fyn, where we had collected Bimmers Josefine (Nunu), which were then installed in Rønne branch.

Nunu is sweet and kind, a bit reserved with strangers, but when there is contact, then you have a really good friend.