Laura became our sheltie nr. 4. She is comming from Elverlamshuset.

We actually had enough dogs, but she was just the kind of dog you could not leave again.

Laura is also an English type, just like the others.

She is at the top end size in the breed standard.

At first we actualy thought she was a bit stupid, but she proves in fact to be quite teachable.

She has a fun nature-she will not accept entirely the ranking in the House, but muscling blithely into all contexts.

Laura is a little silly, but quick and nice.

In February 2008, we have had to redeploy Laura due to Ullas untimely death.

Laura has had 4 litters. In 2008 she got Xargo, Xavier and Xenia with Frodo. In 2009, she received further Babette, Be My Becca, daisies, Bibbi, Bine and Blueberry-again along with Frodo.

Later in 2009 was Croft's Scandinavian Leather (Thorbjørn) visiting and it resulted in the puppies Esbjørn og Esger. Her last litterwas in 2010: Nadi and Nova. The father was Frodo.

Laura are not going to have any more puppies and she has moved back home again in October 2010 with a puppy (Nova) from her last litter with Elverlamshuset.

Laura rapiidly fell inn along with her puppy, and she started agility and rally. She has not forgotten her childhood teachings, even though she had been away for a long time. She has never been as determined as Thea and Emma, who has put much seriousness in the races-Laura is the kind of "sportsman" who says - Well lets injoy and have a little fun..

She started compiting again at the time Emma started to retire. 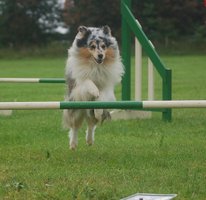 She has always been tru to her soul - most wishes are published by standing in front of the human, stare and start mumbling, until the human reacts. Next to that - when cuddling she wants to be close, very, very close. and no matter how little space there is between two people or between man and beast, Laura succed gradually and almost  unnoticed expanding the hole, to take her rightful place-in the Middle-the victory marked generally with a big wet tongue in the nearest ear. 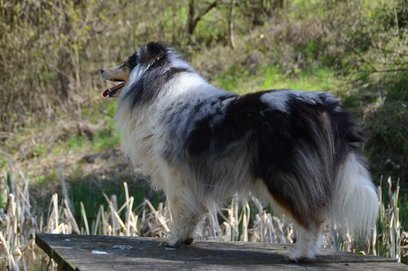