Poulsgaards Be My Hawaian Blue

Poulsgaards Be My Hawaian Blue - called Josefine - became sheltie nr. 3 in our home. We picked her up in 2005 at Kennel Poulsgaard.

Each of us had a dog, Ulla, Maria og Leif, but Ronja (en berner sennenhund) had to be put down at august 2005.

Leif needed a dog, and we could get it at Kennel Poulsgaard.

Month ago we had been talking to Tove and Mogens about having a blue merle, when they heard that Ronja had died they offered us there next blue bitch.

After a little while we heard, they had blue puppies comming up, our concern was - did they mean what they'd said?

Of course the did.

Some exiting days started and on the day of the dirth, we almost followed the dirth. Tove had an open telephone to Lotte, and Lotte sent us mails.

At home we were checking the mail. Another mail had arriwed, another puppy and it was a girl, and we could have here.

Josefine is a small dog, when joining excebitioons it is an advance if she stands on her toes, but she has a nice body.

She is very attached to her handler - Leif.

We intent to start at agility later.

Josefine is a independent bitch.She dicides when to cuddle and who to cuddle.

She is the first of our dogs, who thinks toys are exiting. 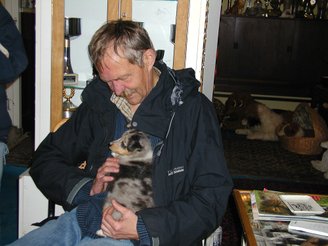 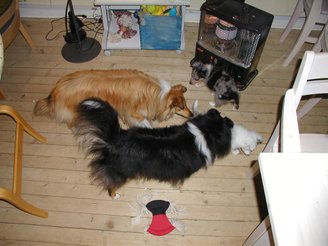 The dog becomes like it's master (and vice verca). We never became sports champions - but it have been a lot of fun.

Josefine has always been daddy's dog, she think its alright to talk to other people - but don't get to close, and she dicides time and place.

She's been the Lonely Wolf, don't like to push her way forward among the other. But she has had her spots in the house, and she has defended them.

In the start of 2015 Josefine started looking sad and didn't want to eat.

She suffered from a very bad pelvic inflammatory disease.

She had to have her uterus removed, and were given sedation. Then the last blodtests arrived, the disease was much worse than we thought.

We decided to let the sedation work, and put her to the final sleep. 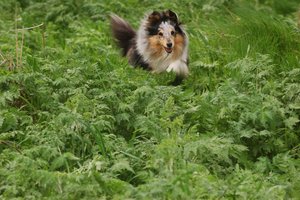